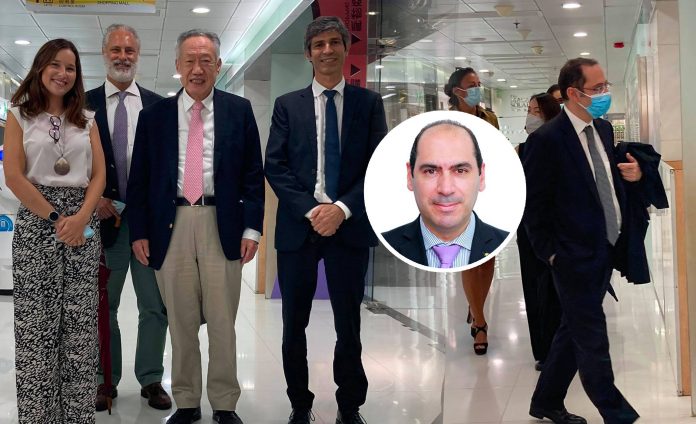 The multi-billion dollar lawsuit between Asian American Entertainment Corp (AAEC) and US gaming giant Las Vegas Sands (LVS) continued for a third day’s hearing on Wednesday (23 June), and AAEC Chairman Marshall Hao was seen at the courtroom’s audience gallery for the first time. The Taiwanese tycoon listened to the full day’s hearing even though he does not understand Cantonese or Portuguese. He told Allin Media that he was “confident” in winning and would stay in Macau throughout the rest of the hearing to discuss the case with his lawyer.

Hao is seeking damages of around 70% of LVS’s Macau profits from 2004 to 2022, which amounts to some MOP 96 billion as he alleges that LVS breached its agreement with AAEC on jointly bidding for one of Macau’s casino licences back in 2001.

Carlos Lobo, a legal advisor to the former Macau Gaming Committee, was called as a witness by the defence team on the third day of hearing. The claimant’s legal team tried unsuccessfully to bar Lobo from taking the witness stand on the ground of his previous work connections with Venetian Macau.

Presiding judge, Seng Yoi Man, considered that there were no grounds to recuse Lobo as a witness since the questioning would only pertain to his work with the Macau Gaming Committee.

As in the previous two hearings, one of the main points of contention remained the timeline of the fallout between AAEC and LVS. AAEC claims that LVS was dealing with an alternative partner, at a time when its partnership contract with AAEC, which lasted until 1 February 2002, was still in force.

Lobo was asked about a letter dated 1 February 2002 from LVS, notifying the Macau Gaming Committee that the firm had parted ways with AAEC since 15 January 2002. The date of the fallout was mentioned in a final report on the bidding process written by the Macau Gaming Committee, Lobo said the team drafting the concluding report “must have had a supporting document” regarding the 15 January date, but did not mention specific details.

However, Lobo noted that he was unable to determine the relationship between LVS and AAEC between mid-January and February. It has also been revealed that Jorge Menezes, the lawyer representing AAEC, was a co-author of the Committee’s report.

Lobo added that AAEC was an experienced company in the finance sector, but did not have experience in tourism or gaming. He said the Committee at that time did not want financial institutions to have direct links with gaming due to concerns over money laundering.

The trial will continue on 1 July, and Lobo will return to testify again.