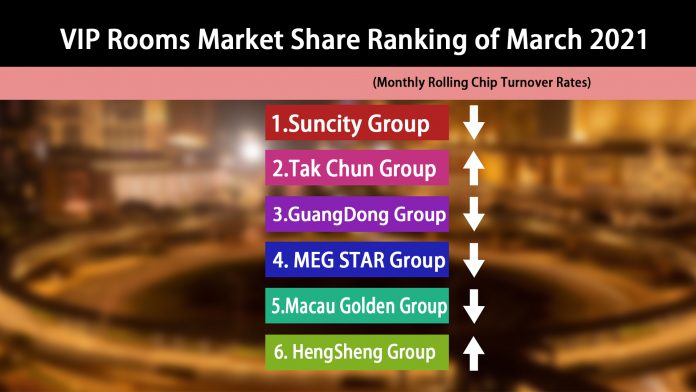 Macao’s total gross gaming revenues stood at MOP23.642 billion in the first quarter of 2021, a rise of 8.2% compared with the previous quarter and a decrease of 22.4% compared with the same period of last year, according to the latest figures released by the Gaming Inspection and Coordination Bureau.

The past month of March saw the highest total gaming revenues in Macau since the Covid-19 pandemic in February last year; total gaming revenues in the past month hit MOP8.306 billion, a year-on-year increase of 58% and a month-on-month increase of 13.6%. However, the overall performance of VIP rooms remained sluggish. According to data provided by industry insiders, the total rolling chip turnover of junket operators in Macau fell by 4.2% to MOP46.5 billion in March while total income dropped by 36% to MOP1.15 billion.

VIP room gaming revenues up by 9% in February; both Suncity’s and Tak ...