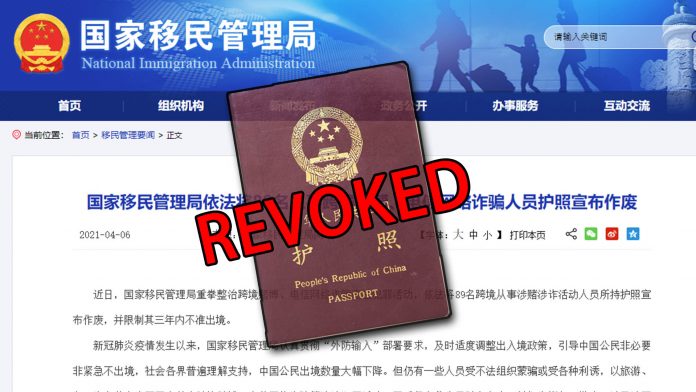 The National Immigration Administration of China has revoked the passports of 89 Chinese citizens who are allegedly involved in overseas gambling and cyber fraud and has barred them from exiting the country for three years, according to a statement released by the Administration on 6 April.

The latest move by China’s border control agency shows the nation’s renewed determination in clamping down on organised overseas gambling, both online and offline, which is now a criminal offence that carries a maximum jail sentence of 10 years.

Although the number of China’s outbound visitors has drastically decreased since the Covid-19 pandemic as citizens are advised to avoid all unnecessary travels, some people still try to go to gaming destinations in Southeast Asia to take part in gambling or cyber fraud in the name of sightseeing or business trips, the statement says. Such illegal activities often lead to kidnapping, blackmailing and other organised crimes, posing a serious threat to the nation.

The National Immigration Administration has vowed to step up its efforts in combating overseas gambling in collaboration with the public security authorities. Some of the 89 people who got their passports revoked have been earlier repatriated back to China for overstaying or working illegally while some have been arrested for illegally exiting the country through the southwest border.

Passports of 89 Chinese citizens involved in overseas gambling are rev...

Inbound visitors to Macau plunges by nearly 70% during CNY, with only ...

Organising Chinese citizens to gamble outside China made a criminal of...

VIP room gaming revenues up by 9% in February; both Suncity’s and Tak ...