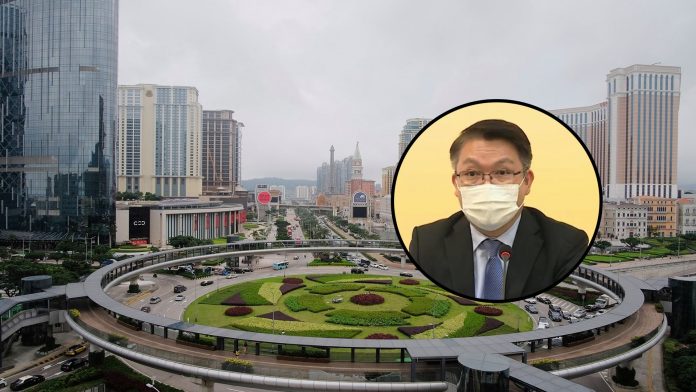 The Macau government is going to roll out another round of financial relief measures to boost the local economy, including the provision of paid training to gaming workers who are on unpaid leave, and will be launching a public consultation on the tendering of gaming concessions, announced the Secretary for Economy and Finance, Lei Wai Nong, during a press conference today (15 March).

The new round of economic stimulus package includes: cash handouts of 10,000 patacas to permanent residents and 6,000 patacas to non-permanent residents starting next month; consumption rebates of up to 600 patacas per month for people with mobile payment apps starting from May till December and an extra electronic consumption rebate of up to 5,000 patacas to elderly citizens with Senior Cards; a cash subsidy of 200 patacas for each resident who book a hotel room in Macau; extending the current paid training scheme to casino workers who are on unpaid leave (each worker is able to get 5,000 patacas in subsidies upon completion of training); as well as a series of tax reductions and rebates.

Lei Wai Nong explained that the main purpose of the stimulus package is to boost domestic demand and bolster the domestic consumption market. He added that Macau’s economy was beginning to recover from the Covid-19 pandemic but economic rebound would take some time.

According to Lei, Macau’s gaming revenues are rising steadily after last year’s drastic fall and mass-market players are now the main source of revenues for local casinos. Lei is hopeful that the local economic situation will continue to improve as more and more people get the Covid-19 vaccine shots.

When asked about the government’s forecast gaming tax revenues of 130 billion patacas for 2021, Lei said he was still confident that this forecast would be met as figures showed gaming revenues were improving steadily.

Although Macau’s economy is slowly recovering, many redundant workers face great financial pressure in the wake of the year-long pandemic. Last Friday a group of more than 100 unemployed construction workers protested outside the Labour Affairs Bureau, blocking the roads nearby. Police had to be deployed to maintain order during the protests.