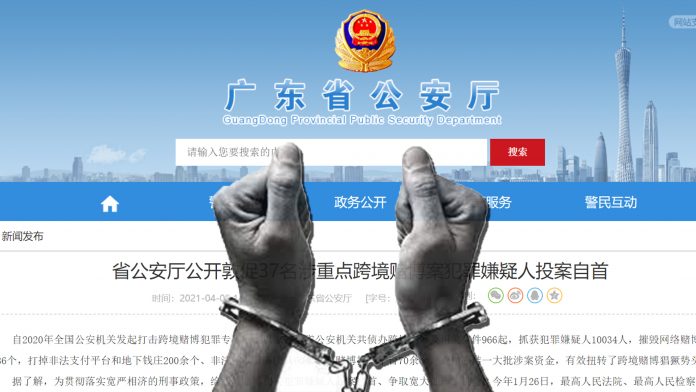 The public security authorities of China have cracked down on over 17,000 cases of overseas gambling since last year; over 3,400 online gambling portals, 2,800 illicit payment platforms and underground banks as well as 2,200 gambling promotion websites have been busted, according to mainland Chinese media reports. Nearly 110,000 people allegedly involved in these cases have been arrested; more than 35,000 of them have been indicted.

In a related development, the Guangdong Public Security Department has released a notice to urge 37 major suspects involved in two organized overseas gambling syndicates to turn themselves in to the police by the end of this month to get “lenient treatment”. The names and identity card numbers of the 37 suspects from the two criminal syndicates are released in the notice.

According to the Guangdong Public Security Department, many of the members of these two syndicates have been arrested but some are still at large.

In Guangdong Province alone, a total of 836 online gambling portals and over 200 illicit payment platforms and underground banks have been busted in 966 cases of overseas gambling since last year.

A national 24-hour hotline has been set up for people to report suspected overseas gambling or related crimes. More than 50,000 tip-offs have been received by the hotline so far.

In addition, more than 230 criminals involved in overseas gambling have turned themselves in to the police since the Ministry of Public Security published a notice on 26 January 2021 urging people engaged in the criminal activity to surrender themselves in exchange for more lenient sentencing.

The new criminal law of China, which came into force on 1 March this year, has made the act of organising Chinese citizens to take part in overseas gambling a criminal offence.