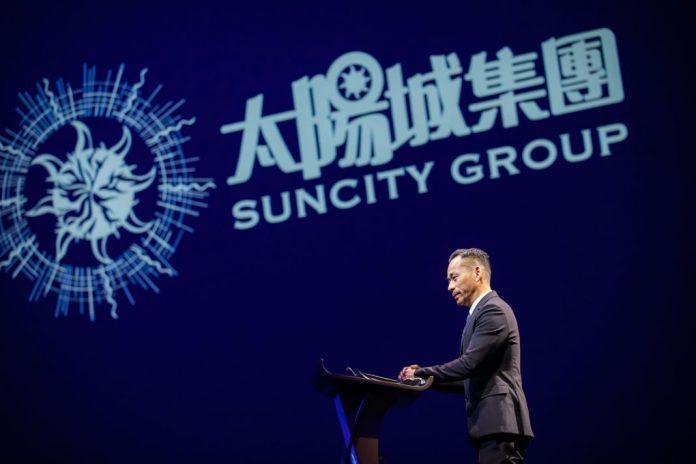 Suncity Group Holdings Limited (HKEx: 1383, “Suncity”) announced today (March 30) its full year annual results. Full Year Group Total Revenue was RMB199.3 million (HKD235 million), down 67% year-on-year. Full Year Group Consolidated Adjusted EBITDA was negative RMB(105) million, versus RMB(59.4) million in 2019. Full Year Group Net Profit Attributable to Equity Holders of the Company was RMB786 million in 2020, which was a significantly turnaround from Net Loss Attributable to Equity Holders of the Company of RMB(1,484.3) million in 2019, though the profit was primarily non-cash in nature. Alvin Chau, Chairman of Suncity Group Holdings Limited stated, on a strategic geopolitical basis, the Group diversifies their integrated resorts in North, South and East of Asia and will continue to make good use of Macau as a headquarter for Suncity’s global integrated resort operations. He also extended his gratitude to employees and shareholders for going through a tough 2020 together. He said, “2020 may have been tough, yet we passed every single hurdle that was laid ahead of us before, and I am sure there is no difference this time.” Suncity’s (HKEx: 1383) earnings per share was 10.65 Chinese cents, and has not declared any dividend. Stock price as of market close was at HKD0.61 on March 30, down 1.61%.

In the Group’s Vietnam integrated resort Hoiana, the Group said that business was challenging due to the cancellation of flights and the suspension of visas, which caused the grand opening ceremony to be postponed. Alvin Chau said, “Leaving us no chance to showcase what a masterpiece that we have created”. Hoiana is facing extremely challenging business environment due to COVID-19 since preview from 28 June 2020. Hoiana’s post-preview Total Net Revenue was approximately USD4.8 million. Total GGR was USD8.9 million. Its Total Adjusted EBITDA was negative USD(32) million, Hoiana played unlucky in its gaming operations which decreased its Adjusted EBITDA by approximately USD1.2 million. Normalised Adjusted EBITDA was negative USD(30.8) million in 2020.

The Group stated that it continues to receive strong support from main shareholder, Mr Alvin Chau. Mr Chau exchanged his shareholder’s loans into perpetual securities, and committed to a total of HKD6 billion, which enhanced the Group’s net asset position, enlarged its capital base and reduced the Group’s gearing. As of 31 December 2020, the Group’s bank balances and cash was RMB2.2 billion, while its total bank and other borrowings was approximately RMB1.3 billion.

The Group indicated that it has a clear road map for development of integrated resorts in Asia. In Russia, Tigre de Cristal Phase I upgrade is now ready. The Group said that its brand-new Suncity VIP room, restaurants and a new private club are now ready to be in operations. The Group said that its Phase II planning & design are on its way, although there were minor delays due to COVID-19. In the Philippines, Westside City Project’s main design and piling works are now completed and has started to build the superstructure above the ground. In Vietnam, the focus of the Group right now was to ensure the fiscal survivability of Hoiana until travel resumes. In Japan, the Group has been moving forward with plans to develop a diving resort in Miyako Islands, Okinawa; and a skiing resort in Niseko, Hokkaido.

Mainlander on Covid special monitor list arrives in Macau but needs to...